One day on Aegina

Spend a day on Aegina

Take the morning ferry from Piraeus and in 1h20m. you arrive in Aegina. The tiny church of Agios Nikolaos, at the port of the island, welcomes you. The beautiful neoclassical buildings remind you of the glory of the island.

What can you do in Aegina

What can you do in Aegina

Visit the Archaeological Site of Kolona. 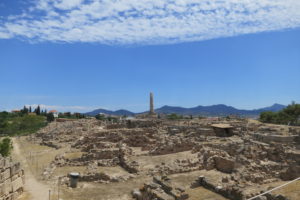 The Hill of kolona was inhabited in prehistoric times through the classical period. Extensive walls and foundations have been discovered and excavations are still in progress. One single column is still standing, the only remaining from the Temple of Apollo built in the 6th c. BC.,

The small Museum  (Tue-Sun 08:30-15:00), containing a small but rich collection of pottery and sculpture from all periods of Aegina’s history. One of the most significant exhibits is the statue of the Sphinx (460 BC), which was dedicated to the Temple of Apollo. It is an extraordinary sculpture, with a head of a woman and a body that is half eagle and half lion,

The Doric temple of Aphaea

The Doric temple of Aphaea that we see today in a very good condition, was built about 490 BC of local porous sandstone. It stands on top of a pine-clad hill above Agia Marina. The first temple on the site (700 BC) was dedicated to Aphaea, a deity from Crete. Aphaea was worshiped at this sanctuary but the myth can be traced back to the 14th c. BC. and according to Greek mythology she was a beautiful young lady, another illegitimate child of Zeus. King Minos of Crete had fallen in love with her. Trying to escape from him she jumped into the sea but was caught in the net of fishermen. They took her on their boat. A fisherman, captivated by her beauty, fell in love and wanted to keep her for himself. Aphaea escaped, got out in Aegina, and asked for help from her half sister, goddess Artemis. She vanished in the woods of the island. When the fishermen arrived on the spot, they found only a statue. “Aphaea” in Greek means ‘invisible.’
On a clear day, you can see the Temple of Poseidon at Sounio, as well as the Acropolis of Athens. These three temples form the sacred triangle of antiquity, an isosceles triangle, between North, East and South. (Open daily 08:00-17:00, Museum: Tues-Sun 08:30-14:15).\

The Church of Agios Nektarios (named after its patron). 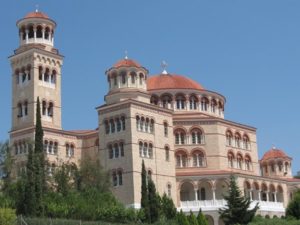 The Church of Agios Nektarios aegina

His memory is celebrated on 9 November.

You may have lunch in a taverna at the port, swim in a nice sandy beach and in the afternoon board the ferry back to Piraeus.